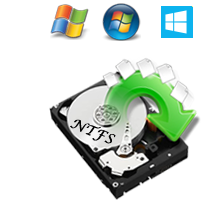 Hard Drive data disaster is one of the most prominent dangers that is encountered by n number of users. No matter how many precautions are taken, data disasters tend to occur and lead to huge data loss. Hard Drive data can become inaccessible in one of the three conditions- Deletion of hard drive data, formatting of hard drive or corruption of hard drive data. Such situations call for a recovery tool that can ensure outright recovery of data made inaccessible due to the above method reasons. Hard Drive Recovery Software is an efficient NTFS recovery software which ensures to recover deleted files from NTFS drives. The tool enables the user to recover data deleted due to either NTFS partitioning or FAT partitioning.

Know More About Partitions (FAT & NTFS) Supported By The Tool

When a hard disk is partitioned, the total space of the hard disk gets divided into partitions. All the files are stored on a particular section of the drive or in clusters. When an NTFS is used the cluster size ranges between 512 bytes to 64 kilobytes. Whenever a file is created with NTFS, the details of the file get stored in another file named as the Master File Table.

The NTFS Recovery Software assists to repair corrupted NTFS disk files. It is a proficient tool that recovers even permanently deleted data from the hard drive. If you are also looking forward to repair damaged NTFS file system or FAT file system, then you can surely deploy the tool.

Using Windows Vista/7/8/8.1, launch the tool as "Run as Administrator."

I accidentally formatted my hard drive disk. Due to this all the data residing on my drive got deleted. But with your Hard drive recovery software, the impossible task of hard drive data recovery got finished in an appreciable amount of time and without any extra efforts.

Few days back a friend of mine borrowed my hard drive and accidentally formatted it. We were very worried I had ample amount of important data stored in it. Then we came across your Hard Drive Recovery tool. It not only assisted us in recovering the entire data but also ensured no data loss.